The running season has arrived and nobody wants to be held back through injury. One of the most common and reoccurring injuries is pain around the outside of the knee. If that’s the case, you could be suffering from iliotibial band syndrome (ITBS). ITBS is an overuse injury that is common in endurance athletes like runners and cyclists. It affects a tissue that runs from the side of your hip all of the way down past your knee. The inflammation particularly gathers around the outside of the knee. At times, it can be incredibly painful and is typically a difficult injury to deal with.

There are specific factors that can make someone more susceptible to developing the injury. Tight muscles on the outside of the hip such as the tensor fascia latae may make someone more susceptible to the injury. Weak hip muscles, particularly the gluteus medius are also thought to be a significant contributing factor. Over pronation or poor foot biomechanics may also increase the risk of injury, if the foot rolls in or flattens, the lower leg rotates inwards causing the knee to also turn inwards which increases the likelihood of friction as the tendon rubs on the outside of the knee.

Treatment for ITBS starts with reducing the pain and inflammation, identifying any underlying causes, followed by stretching and conditioning the iliotibial band and surrounding musculature along with a gradual return to full fitness. Rest is important to allow the inflamed tendon to heal. Continuing to run with ITBS will most likely make it worse.

Stretching, strengthening and sports massage all play a vital part in recovery from ITBS. Stretching and strengthening the muscles on the outside of the hip in particular is important. The muscles on the outside of the hip which abduct the leg will help prevent the knee turning inwards when running or walking and therefore help reduce the friction on the ITB tendon at the knee. In particular strengthening exercises for the tensor fascia latae muscle and gluteus medius such as heel drops, clam exercise and hip abduction are important.

Sports massage applied to the iliotibial band can help relax and loosen the surrounding tissues, in particular myofascial release techniques have been shown to be highly effective. The return to full fitness should be steady and gradually. It is important to continue to stretch, if the iliotibial band is tight then the injury is very likely to recur. Simply reducing the inflammation will not cure the injury permanently. Even when fully fit it is a good idea to get a regular sports massage which will eliminate tight spots and knots that can cause the iliotibial band to tighten. 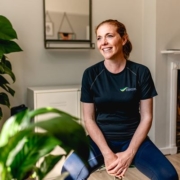 Another Year at 7 Pools
0 replies

What is a LISS workout?
Scroll to top