Pilates is the go-to exercise of many back pain sufferers; they swear by it’s power to engage, tone and reshape the core of the body, and to teach them proper spinal posture. But what actually is Pilates? And what is it about Pilates that makes it initially so much better for people with lower back pain than other forms of exercise?

Pilates was invented by it’s namesake Joseph Pilates in Switzerland in the first half of the twentieth century. Pilates described his method as ‘the art of controlled movement’ and gradually refined the discipline to a set of around 30 defined exercises, with adaptations to make them easier or harder depending on the strength of the person performing them.

Joseph Pilates was the son of a gymnast, and worked extensively with ballerinas when he was first designing his exercise programme – and you can see the themes of stretching and muscle control across all three exercises.

What does it work?

Pilates is all about initiating the bodies movements from a stable core, so the first principle of Pilates is to engage the core. To really amp up the contraction of these muscles, the teacher will show you how to recruit your breathing muscles to help – by inhaling when you’re setting up the move, and exhaling when the harder work is being done.

They refer quite often to the “power house” muscles in Pilates – which does include the core, but also extends to include the hip and shoulder girdle muscles. Gaining control of these muscles is really important in correcting people’s posture – and perhaps the reason that Pilates is so effective for people with back pain.

Where can I try?

There are lots of Pilates classes available these days – in gyms, church halls and community centres – but it’s often the case that the best ones take place in dedicated Pilates studios. Lots of Pilates teachers will offer one to one personal training, if you feel you want some more guided practice to get you off to a good start.

You can find amazing Pilates classes for every level at

How To Keep Your Motivation 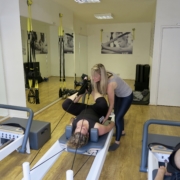