I’ve been treating Gemma for a few years now; she’s an incredibly fast runner, and one of the rising stars of the Royal Sutton Coldfield Athletics Club. We started off addressing a pelvic discrepancy when Gem was increasing her distance, and ironed out various different niggles in her ankles and hips since then. At the distances she runs, Gemma uses osteopathy as an MOT for her body, to keep her performing well in the sport she loves.

In our chat here, Gemma talks me through the trails of training, the cost of her sport, and gives me advice for my first ever running event.

Emily – So you did well in the Paris Half [Marathon]?

G – And all my miles were really consistent as well; I was averaging at 7 [minutes] 37 [seconds] so I was pleased, because I didn’t really know what I was going to do.

E – Yeah, because you were coming back from injury, so those times are really, really good.

G – It was quite hilly as well! I was surprised!

E – And for having spent the first part of the year injured, and not really training on the build up to it like you would normally, you’ve done really well!

G – I was doing pretty much all my normal mileage till the injury, but then I had 3 whole weeks off, so… I had to slowly build back up.

E – Because of the snow, and because of your foot [injury]?

E – And I think that was one of the main things really, that we’ve been working on, is that all the miles you put in, you end up with these over-use niggles, and then we end up ironing them out before they become real problems to you.

G – Yeah! Really, it’s just maintenance for me, bit of an MOT every 6 weeks.

E – Because you can’t really run 30 miles a week and not get a bit of wear on your body.

G – No, and some days I’ll be doing speed work with the club and the next day I’ll think I need a massage now! I could do with one every week really!

E – Well the thing is, if you were in Team GB, you would be!

G – And that’s probably why they don’t get injured.

E – Yeah, I once had a patient who said to me, “Andy Murray plays tennis every day, and I only want to play once a week, how come I get injured and he doesn’t?” And I said, “Well, he’s got a whole team of people whose only job it is to keep him playing tennis.”

G – He actually gets quite a lot of injuries anyway!

E – I know, he’s always having something done… This calf is a bit tight here.

G – I do need some more trainers actually. I’ve got 500 miles on these ones; they don’t last that long.

E – Exactly, and you can get new trainers, but you can’t throw your feet away!

G – No! I’ll probably keep these ones for going in the park on a really muddy day or something. Because you don’t want to get mud on your brand new trainers.

G – And that’s with me rotating trainers aswell, because I’ve got trail and speedwork shoes. People think running’s free, but it’s not!

G – Have you been doing much running?

G – But you do the [Ebrook] Bootcamp, so I think that’s good training. 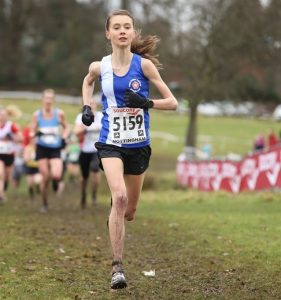 E – I’ve been doing a lot of sprint training, and a lot of strength [gym] training, so I think that will be good… One of my other patients, she plays American Football, and her team marshal the race, to raise money for their club, and she was saying that she’s on obstacle number 30-something, and she’s only 7k in… So I don’t think there’s actually going to be that much distance to run. I thought it might be 10 obstacles for 10k or something?

G – Yeah, you probably won’t feel like you’re even running that much because it’s so broken up. It will take your mind off it! I think it’s more strength…

G – Cool, is it the one in Warwickshire?

E – Yeah, the 7th… Isn’t that the weekend [another runner in Gemma’s club] is doing Rome [marathon]?

G – Yeah, there’s a lot of clashes in the season. I can’t always do the 7 Pools because of other events. That was the weekend I just did Paris.

E – And it [7 Pools 10k] did end up getting cancelled because of the snow anyway.

G – Yeah, that was a shame, it was too cold for the marshals. But the relays went ahead the day before – it wasn’t so cold. More or less everything that was on the Sunday got cancelled.

E – I know, there were a lot of people disappointed. You train all winter, and it’s the hardest bit, to keep going out when it’s cold and dark and wet, and you get to the point of it all, the event, and you can’t go ahead.

G – Yeah, I was worried about Paris, because there had been snow leading up to it, and I was lucky because our flight was on the Friday morning, and by the afternoon they had cancelled planes out of Birmingham, so there were some people who couldn’t go! We were so lucky! It started off at Parc Floral de Paris, and sort of went down to Notre Dame, along the river and back into the city again. There were a lot of hills towards the end, but it was a welcome bit of change for my muscles!

You can find out more about running with Gemma’s club, the Royal Sutton Coldfield Athletics Club at

Looking after your Runner’s Body 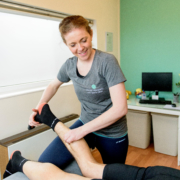